Rainbow Territory spokeswoman Sam Bowden said the purpose of the event was to draft letters to local and federal politicians in a bid to change legislation.

“We’ll be sending the letter to a lot of people including Chief Minister (Adam Giles) and the NT Attorney-General (John Elferink),” she said.

Ms Bowden said the organisation wanted “gender identity” to be included in the Discrimination Act and an exemption for education institutions to discriminate on the basis of sexuality to be removed from it.

She said protection on basis of sexual orientation and gender identity should be included in the Anti-Vilification Act.

“We want to see these laws amended and to be able to access fertility services,” Ms Bowden said. “The tide has turned slowly when it comes to marriage equality but the rest depends on the hearts and the minds of other people.” 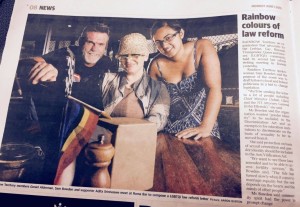