From pre-colonisation times to beachfront bathhouses and tiny offices where the battle against the AIDS crisis was fought, Darwin has a rich queer history.

Mr Hodge has since moved to Adelaide, but returns to Darwin to host walking tours that focus on the Northern Territory’s lesser known history.

1) Put your YES survey in the post already!
2) Help out on the campaign
3) Get inspired by this amazing video from Alice Springs, on the NT Yes campaign Facebook page and all the pictures from the first Darwin Pride March in about 10 years.

If you would like to get involved in the Yes Campaign you can go to yes.org.au to check out events happening in your community. if you would like to get in touch with the campaign you can contact NT Field Director Pat Honan (pat.honan@equalitycampaign.org.au) for events around the NT, or Andrew Addie (centralaustraliayes@gmail.com) for the Alice Springs Campaign. Phone banking, postering, door knocking, market stalls, your ideas!

Alice Springs has been kicking some goals on their campaigning with a great community effort in the mall. Check out the pictures

And not to be outdone, Darwin now has a permanent rainbow crossing for the next 12 months!

If you see any advertisement or statements in the NT to do with the marriage survey that you think are hateful (if you’ve driven down the Stuart Highway lately you’ve probably seen at least one), take a photo and email it to the Anti-Discrimination Commission NT. They are collecting this information. Please include where and when you saw it. http://www.adc.nt.gov.au/contacts.html 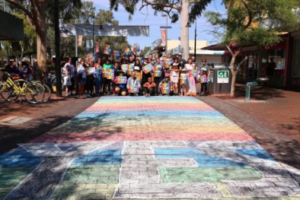 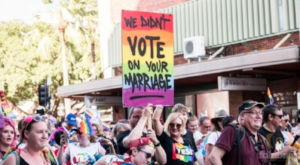 This is not a typo! Katherine is having a pride festival. Please come and support the community in Katherine (or step out your door if you are there already)

Check out the Facebook page Keep Talking NT for details 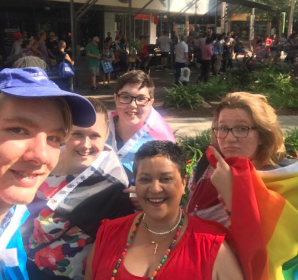 This law impacts our community. It is up for review, and we need to tell our stories about how discrimination under NT law for LGBTQI people impacts us.

Some of the ways the Act doesn’t protect us are:

The review closes 3 December 2017. Then the government will start thinking about what the new law will look like using the stories and information that they receive in submissions. Please get in touch with Rainbow Territory if you want to contribute to its submission in relation to changes to the law impacting LGBTQI Territorians, or come along to our next meeting. You can also make your own submission, or get together as a group and make a submission.

We promise it will not look like the photo above…

Get in touch if you want to sing, or if you want to help make a community choir happen. Email outnt@outnt.info listing your contact details, singing experience (can be none!).

Rainbow Territory is meeting fortnightly and is working on the following
– yes campaign
– review of the Anti-Discrimination Act
– long term funding for Safe Schools
– mental health & suicide prevention advocacy
– end discrimination in adoption
– change the births, deaths and marriages act NT so that people don’t have to get gender reassignment surgery to change their ID to their gender identity
– supporting community connection through the outnt website and other projects

Not interested in any of the above? If you have an idea and want people to work on it with you, Rainbow Territory can help share information or a call to action through the OUTNT Facebook page or this newsletter, just get in touch and tell us what you need. Queer bush walking club, gay liberation society, drop us a line.

And finally, if you want to provide feedback about Rainbow Territory’s work (good and bad) you can do so via the outnt website www.outnt.info/rainbowterritory We work on things that we think are important to the community, so tell us how we are going.

The next Northside Health NT LGBTI Specialist Clinic is in November.

Visiting GPs specialising in LGBTI health run a 2 day clinic on a monthly basis to provide welcoming, high-quality health care to members of the LGBTI community.​

Call 7999 7448 or email admin@northsidemedical for an appointment. 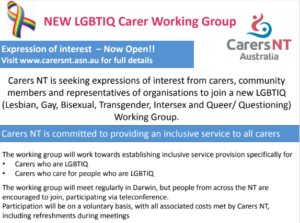 Headspace Darwin is continuing its young person’s group. A safe and confidential place to be yourself, connect with like-minded young people and find out information about health, services and support. For people aged between 12 and 25. Check out the flyer for info or get in touch with Headspace.

A queer and feminist book club has kicked off in Darwin. Last book was Desert of the Heart (which the awesome film Desert Hearts is based on). If you like the idea of this, then get in touch to find out what book is next outnt@outntinfo 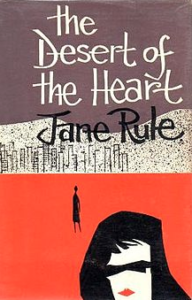 It’s time NT law catches up with the community

Rainbow Territory member Jane Black says “the changes we are calling for are important because they will help ensure Territorians do not experience discrimination or vilification on the basis of their sexuality, gender identity or intersex status. For example, right now in the NT, a teacher who is gay can be refused a job in a religious school because of their sexuality. This is outdated and does not reflect the NT that we live in”.

Rainbow Territory calls for changes to the law to ensure that people trying to access IVF would be protected by NT Anti-Discrimination legislation. They are currently afforded no protection. “Rainbow Territory is aware of people being denied access to IVF in Darwin because of their sexuality or same sex relationship. This is totally discriminatory and unacceptable” says Rainbow Territory member Jane Black.

Rainbow Territory is also campaigning to change other NT laws and policies. The Adoption of Children Act NT currently prevents same-sex couples from adopting children. Rainbow Territory member Jane Black states “The Anti-Discrimination Act is not the only law that needs changing. We want to see an end to all discrimination against LBGTQI Territorians.”

The current Anti-Discrimination Act provides an exemption for religious educational institutions in the area of employment, see section 37(a)

(i)     religious belief or activity; or

(b)     is in good faith to avoid offending the religious sensitivities of people of the particular religion.”

The law substantial change in the area of gender and sexuality for the NT Anti-Discrimination Act was in 2003 through the Law Reform (Gender, Sexuality and De Facto Relationships) Act 2003 (Act No. 1, 2004). Assent Date 7 January 2003. Commenced 17 March 2004.

“In 2002/03, DCLS worked with community members and other service providers to develop a campaign promoting equality before the law for gay and lesbian Territorians. This included undertaking research and the development of submissions to government as well as community education and action. This campaign resulted in the passage of the Law Reform (Gender, Sexuality and De Facto Relationships) Bill 2003 which removed the majority of discriminatory provisions from NT legislation.”